skip to main | skip to sidebar

we took a trip to DC and had a blast!  the cherry blossoms were out in full force and we timed it perfectly!  stella loved it and so did nate ... it was both their first time in the capital! 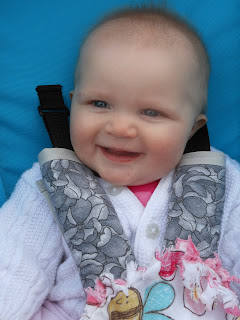 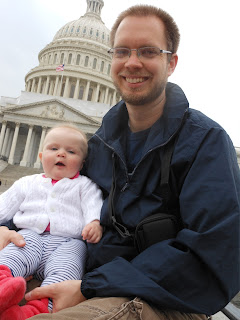 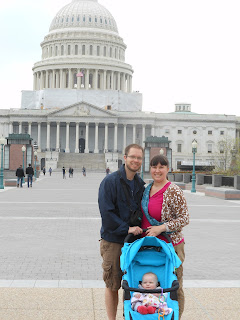 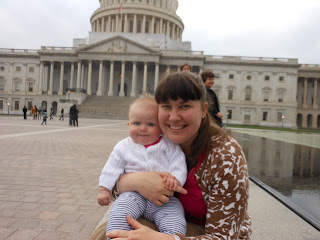 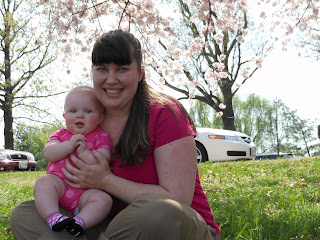 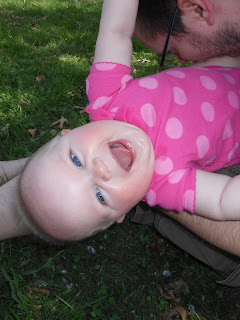 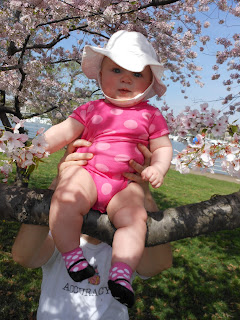 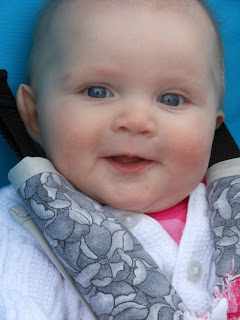 and we got to see some good friends and their baby that is one week older than Stella!  It was so so so fun to see them :) 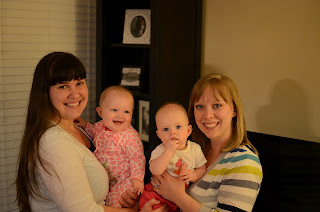 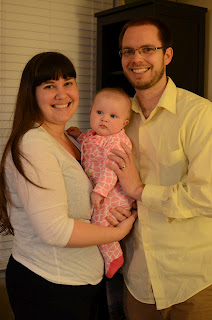 Stella's sixth month has been full of lots of milestones - she is cutting her first tooth!  she loves chewing on those linking rings - best few dollars ever spent! 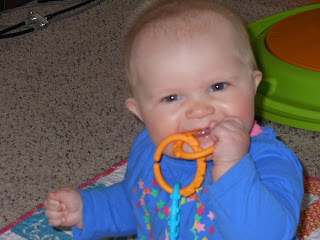 she is getting so big! i transitioned her into 6 month clothes at the end of her 5th month and she spent less than a month in them!  cute little outfits like this one were only worn once or twice!  she is now in 9 month clothes ... and counting :) 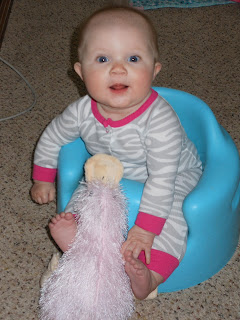 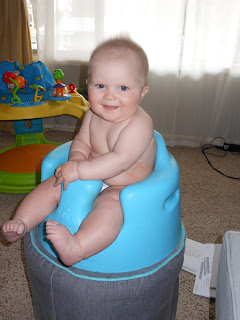 she also started "talking" babbling up a storm with ba ba ba and mum mum mum mma ... i of course think she is saying mama. she finally rolled over from her tummy to her back for the first time!  but she only does it when she really has to!  while she was an early sitter she is taking her sweet time on the rolling over. 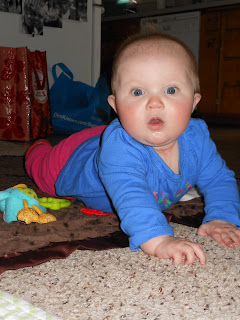 she still hates solids ... she likes the idea of eating and all the trappings of it but the actual food itself - she is not a fan ... so i decided to take the stress off us both and quit trying for a few weeks.  i will try again sometime in may.  this is the progression of her first time eating sweet potatoes ... 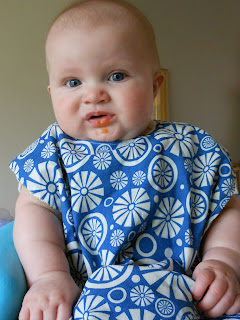 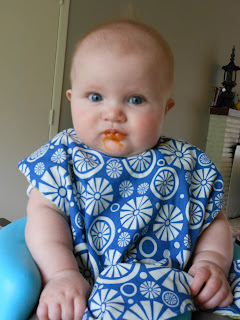 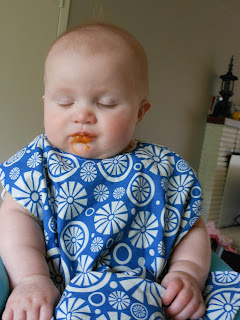 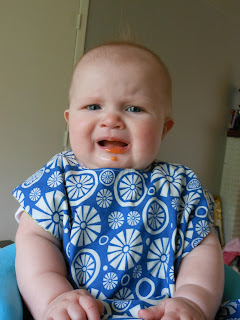 we also transitioned her to the bath tub (this picture shows the baby tub too but now that we have a non-slip mat she is in the tub with out it) ... it is her special daddy time and she loves her rubber duckies! 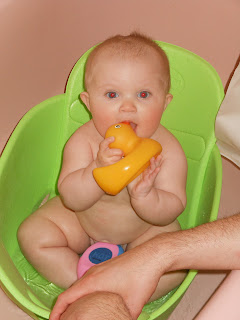 we have had some nice days and been outside ... stella was not enjoying it - she must be a true Pacific Northwesterner! (to be fair, it was nap time). 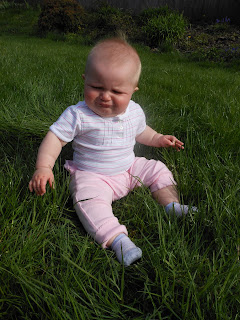 Posted by Nathan & Bethany Soelberg at 8:18 AM 4 comments:

We Have a Sitting Baby! 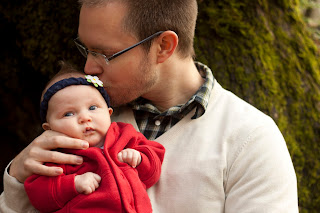 Posted by Nathan & Bethany Soelberg at 9:24 AM 2 comments:

a friend took these photos ... i think they turned out alright considering i had just given birth two months earlier.  i don't want to not take these photos just because i am self-conscious ... because nate and stella look great! 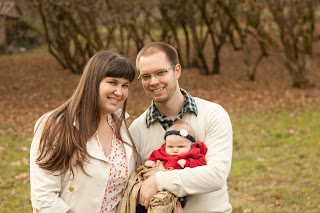 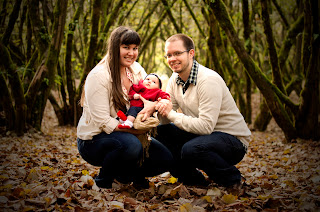 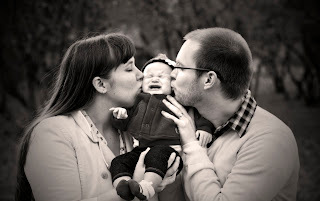 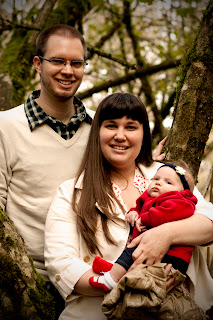 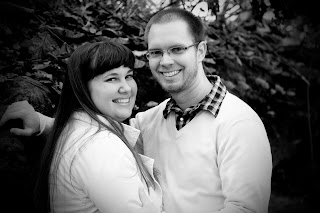 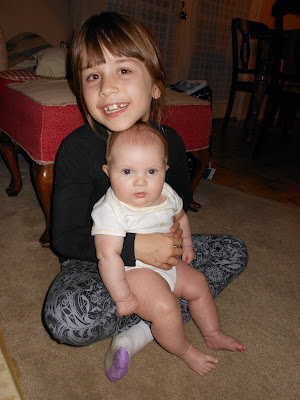 over the last few weeks there was a lot of the above going on ... introducing baby stella to her cousins (and her aunts and uncles too)!  we are very blessed people and spent 24 days in California visiting friends and family.   its a 13+ hour drive (the plus is for the unplanned stops for baby care).  but baby stella did awesome on the drive down!  sleeping pretty much the entire time waking up to take a bottle (that i pumped in anticipation for her).  we didn't make any special baby stops!


it seems that California agrees with baby girl because she has really bulked up between two and three months old.  she has chubby cheeks and arms that look like rubber bands are around her wrists ... i love love love to kiss those cheeks.  she also is a very smiley girl ... which we love!


baby girl loved all the attention and all her fun christmas gifts!  unfortunately some of her cute outfits won't fit for too long since she has had a big growth spurt on vacation and has only been in 0-3 month clothes for a few weeks.  we decided she needed to wear all her cute outfits as much as possible before it was too late!

baby girl is holding her head up so well now and is looking forward to sitting on her own!  she also loves to stand on our laps.  overall it was a super fun visit getting spoiled by our parents and spending time with our siblings ... can't wait to see them again!

Nathan & Bethany Soelberg
Living in Oregon where Nate teaches ESL at the University of Oregon ... and i am a stay at home mom loving each day with our little girl!

N&B: For Time and Eternity 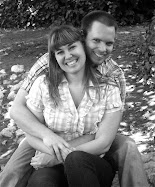 we love our baby girl